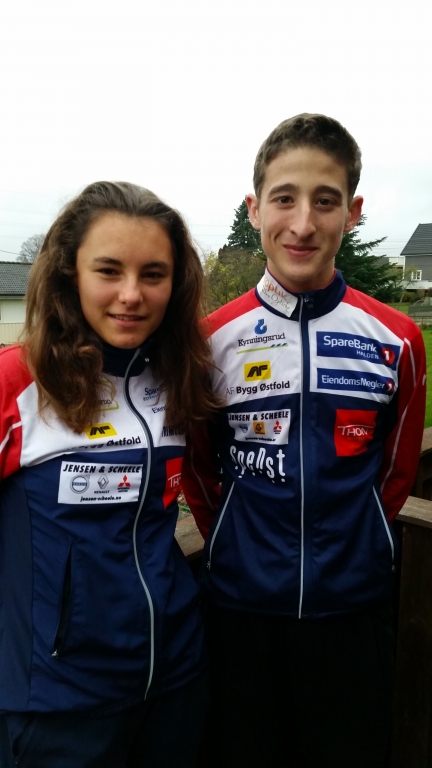 We are very happy to welcome two promising French juniors, Hélène Champigny and Guilhem Elias, in our club. They are both members of the French national team (Hélène as a youth team member, and Guilhem as a junior) and they both come from South-East France (near Marseille on Mediterranean coast).
Guilhem has already shown up some true talent at international level by setting an impressive streak of 8 medals out of 9 races at EYOC (2015-2016-2017), and he was selected for JWOC already this year with a 6th place from the relay as best result. Hélène is among the best French girls of her age and has been running EYOC in 2016.

Hélène and Guilhem were training with us in Halden some days in November, and enjoyed it a lot. They are eager to come again next year, and join the club for the big relays that they are especially looking forward to run.

Below you can read interviews with both of them.

What made you join Halden Skiklubb?

What made me join Halden SK is that your training structure is very impressive. On one hand, I'm impressed by the support the runners can get from the coaches and leaders, and by the nice atmosphere there is among runners before and after the trainings... and all the time! On the other hand, I'm really much impressed by your club house on Höiås, and the splendid maps and terrains all around.

And how did you hear about the club?

I first heard about the club while following the big Scandinavians relays like 10mila and Jukola, and talking about it with different French runners who have been running them. The more you get interested into orienteering, the more you hear about Scandinavian clubs. Then, the idea of joining the club came thanks to Eva Jurenikova and Matthieu Puech, who are my club mates in our French club of "Aca" Aix-en-Provence.

I will try to be selected for EYOC 2018 (I already ran EYOC in 2016) and I'm also aiming for JWOC 2018 (even if being selected seems more difficult then). Taking part in one of those international competitions would be great, but there are many more nice competitions in 2018 in which I want to take part, among which POM in February in Portugal, that is one of my favorites and I would like to get good results already there as a good kick off for the season. And of course, I'm also pretty much excited by the idea of running 10mila for Halden SK!

Balise humaine*, relay training and Tranemo** because I like to be in situation of competition against the others.

(*mass-start training where first runner coming to control locations acts as the flag, and wait for all other runners to pass by before starting again and chasing them)

(**mass-start training, sort of one man relay with forked loops).

I prefer day-orienteering, but I think that running at night is very helpful for making progresses, so I know I'm not doing it enough.

Cycling, even if I also like alpine skiing (and snowboarding), but I don't practice cross-country skiing (there isn't much snow around Toulon where I come from) :)

I like swimming, reading, windsurfing and all kind of water sports.

What made you join Halden Skiklubb? And how did you hear about the club?

I joined Halden Skiklubb thanks to Eva Jurenikova, who is in my French club (Aix-en-Provence). She helps me to become stronger in orienteering. In addition she told me about her Norwegian orienteering club and offered me to run 10mila for Halden!

My first impression of the club is that you have a really good training structure here, with almost one training every day of the week! It's really impressive, and very different from France where even the best clubs only offer one or two trainings a week. About the city itself, my first feeling is that there are less people here than in the French cities! :)

My main goal for 2018 is definitely JWOC in Hungary. There are also many other competitions where i want to perform well, such as French championships, 10mila, and different international five days (POM, OOcup, ...)

It's the same for me: Night and day orienteering have each one their own distinctive characteristics, I like them for that!

Just running for a long time in a nice landscape :
It's simple but so good !

Video interview with Guilhem (in French after EYOC2017, see his home terrain close to Aix-en-Provence)
Guilhem on Strava